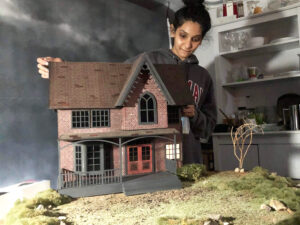 Dazzy Shah is a Canadian Production Designer and Art Director, born in India and currently based in Los Angeles. She has been nominated and awarded for her work on multiple short films on various global platforms such as New Creators Film Festival, Tokyo Shorts, Eastern European Film Festival and more. Her most recent credits include her work as a Production Design Assistant on shows such as Snowfall on FX, and Mindy Kaling’s Never Have I Ever, and as an Assistant Art Director and Set Designer for Disney+ and HBO Max. Dazzy didn’t start out in film, however. In fact, her love for Production Design blossomed from her “fear” of Architecture!

Q: You started out as an Architecture Major. What inspired you to switch your careers?

A: I did! I hold a Bachelor’s Degree in Architecture and Visual Studies from the University of Toronto. To say that I feared architecture is a bit of an exaggeration, but I did fear the potential of pursuing a monotonous career where you are stuck designing the same bathroom or kitchen or plumbing component for the better part of your youth. I thoroughly enjoyed my academic career in Architecture as we were always encouraged to think outside of the box, and it was the fear of not being able to do that in the real world is what made me rethink my career path. I started researching about what other professions require the kind of skill sets I had acquired through my architecture degree, and that’s how I came across set design. The prospect of jumping from project to project, from era to era, and from one design style to another is what excited me! I started off as a Set Decoration Assistant at my University’s Theatre during my final year at U of T to test the waters and I have never looked back! 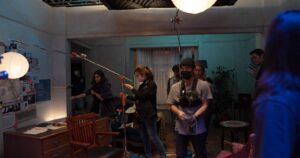 Q: What are the similarities between Production Design and Architecture?

A: If I ever need to explain what I do for a living to anyone not in the industry, I tell them I design the architecture for films and that pretty much sells it. Both fields require a strong grasp of technical skills such as drafting construction drawings, creating conceptual renders for presentation material, creating hand models and 3D models to walk some of the more complex spaces, etc. These were all aspects of Architecture that I loved! Both require a strong understanding of materials, textures, colors, research, and anything that relates to visual design.

Most importantly, unlike real-world Architecture, Production Design–or a film set, rather–is ephemeral. Film sets stand the test of time through their visual representation on a screen, and not really through their physical form, so you can play around with the structure a little bit. Everything still must be extremely safe, of course, but you can cheat materials to look like other materials, and you can add a couple extra sandbags on the back of a jack to make it sturdier, and as long as it’s not on the screen, nobody needs to know. On the other hand, spaces must be consciously designed for the camera. It is important to remember that this isn’t real architecture. If a room needs to feel a tight 6’x6’ square on camera, you work with the director and cinematographer to figure out what the best way to capture that tightness would be, as more often than not they won’t really want a 6’x6’ room. You still need to get the crew in the space! Which also brings me to the point that unlike “real-world” architecture, which is mostly a collaboration between designers and engineers, Production Design requires a much larger scale of partnership between many different crafts, starting with the Screenwriters, to Directors, the Production Team, the Camera Team, and even the Post-Production team, to name a few. It does take a village to make a movie, after all.

Q: Has it been difficult transitioning between these two fields? What are some of the biggest hurdles you have faced?

It has not been an easy journey and convincing my parents that I will survive was a different story, but the support and excitement that my friends and family have for me keep me going! It is true what they say about the movie world being a small one. It is very much a “who you know” kind of business, and networking is a big deal, which is where an introvert like me struggles. You must be okay with sending a hundred cold emails to get that first job. But I have also noticed that people in the industry do appreciate being reached out to and will most probably have good advice, or maybe even a job for you! The days can be extremely long, especially in the indie world where oftentimes the Production Designer and the Art Director are the entirety of the Art Department. That being said, I have been extremely lucky to have found great mentors who have helped me navigate my way through the union world, which I hope to be a part of soon. Some of these mentors are also friends not much older than myself, who have achieved so much already! Watching young women climb up the ladder so fast is truly motivating.

A: I worked as one of the Student Ambassadors for my college when I attended Chapman University to get my Masters. And there I got tons of messages from Indian kids planning to pursue the program. It excited me! I’ll tell you what I used to tell them: it is not an easy business to pursue, especially as an Overseas Student, but it is a rewarding one. One of the greatest things I have found about this industry is that so many veterans genuinely want to help you succeed. People on Facebook groups will jump the gun to answer any of your questions if you are ready to learn and will happily mentor you! They will teach you how to fight for your rights, where to find that Ming Dynasty Throne you are looking for, encourage you to say “no” to unfair wages, and more. The community is what makes the challenge worth it.

Q: What are you working on next?

A: I just wrapped on the third season of Mindy Kaling’s Netflix Show called Never How I Ever which premieres summer 2022 and worked as an Assistant Art Director for the premiere event of Olivia Rodrigo’s new Disney+ Documentary called Driving Home 2 U last month. I try to find a balance between working on network shows and indie projects simultaneously, as the former provide great networking opportunities at this point in my career, and the latter gives me an opportunity to flex my creative muscles. After wrapping my most recent short film titled Soil, directed, and produced by Sam Lembeck, I am currently working as an Art Department Assistant on an upcoming Netflix sci-fi feature film called Atlas starring Jennifer Lopez! 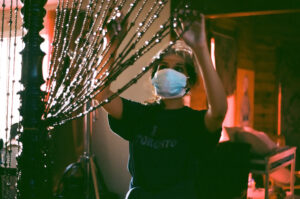 A: I can be found on Instagram, my tag is @dazzle.on, and on Facebook! My work portfolio can also be found at www.dazzyshah.com!

December 13, 2020 Jillian Dale Film, TV & Books 0
Spread the love
Spread the loveTensions and temperatures rise over the course of an afternoon recording session in 1920s Chicago as a band of musicians await trailblazing performer, the legendary “Mother of the Blues,” Ma Rainey (Academy Award® […]

April 28, 2017 Yenis Monterrey Film, TV & Books 0
Spread the love
Spread the loveThe 10 episodes from Season one (1) of one of the most anticipated new comedy ‘Dear White People’ produced by Lionsgate for Netflix is now streaming worldwide since today April 28th. This half-hour […]