You need to get tickets to this right away and get down to the opera house. This is one of those moments that make you proud to be an opera fan because the Lyric’s production of the Queen of Spades revels in madness with a total commitment that you ONLY see in opera. Opera will GO THERE when so many other types of productions will not, and this one is over-the-top in the way that makes opera an exciting and visceral viewing and listening experience.  It is criminal that it’s getting such a short run, only playing until March 1 with just four performances.

Tchaikovsky’s Queen of Spades is full of absolutely gorgeous music. I want to be listening to it again already. With glittering arias for all the main cast members, lush choral numbers and beautiful duets and small-group sequences, it allowed the Lyric to celebrate what it does best, create a glorious listening experience for each audience.

Written in only 44 days and premiering to rave reviews in 1890, this opera is both a marathon and a showcase for its lead tenor, who appears in all seven scenes in its Three Acts. Everything hangs on him and his performance and the Lyric has a superstar in Brandon Jovanovich who is everything this role needs both vocally and as an actor. This isn’t just a demanding part, but original director Richard Jones’ vision is a demanding production, and Jovanovich is completely up to the task.

Jovanovich stars as Gherman, a soldier who is pining with love for a girl he’s been stalking, though he doesn’t know her name. This character is stitched together entirely out of red flags. He is already insane in the very first scene that takes place in a horrible, bleak Soviet-era park.  Insane in a depressed and withdrawn fashion, only animated by his weird obsession with some random girl he saw on the street.

I was going to complain about the production design of this opera in acts one and two in this review, but the whole thing is keyed to Gherman’s mental state. His world is meaningless other than the objects of his obsession, so the fact that we are getting yet another entirely gray production actually makes sense here. The only colorful objects in his world are the girl (who wears pink and red) and items related to his second obsession – gambling, and that’s how it’s designed.  Like in Schindler’s List, the only color we see is the important stuff to Gherman and the fact that the world is weirdly skewed and decayed is because of his mental state.

Gherman reveals his love to the worst friends ever Tomsky (the absolutely powerhouse and spectacular Samuel Yeun), and the solid Kyle van Schoonhoven (Chekalinsky) and David Weigel (Sourin) who bemoan their lack of ability at gambling and wonder why Gherman seems obsessed with it but never bets. Prince Yeletsky (the wonderful Lucas Meachem, playing the only decent person in the opera in a huge turn vs. his awful Don Giovanni earlier this season) joins them and they congratulate him on his engagement to Lisa (Sondra Radvanovsky, incredible as always), granddaughter of the Old Countess (Jane Henschel, completely owning the titular character in her Lyric Opera debut). The countess and Lisa appear and recognize Gherman as their stalker, while he recognizes Lisa as his beloved. Tomsky explains (in a fabulous aria completely aced by Yeun) that the Countess is the only person who knows the secret of a three-card gambling sequence that can’t lose. She made her fortune with it, and only her husband and later her young lover knew it along with her.  She saw an apparition that said the third “passionate suitor” she revealed it to would murder her, so she will now never tell anyone.  Gherman vows to learn the secret. At this point, you already see where it’s all heading – fast train to crazytown, passenger Gherman.

At home Lisa and her best friend Pauline (Elisabeth DeShong reprising her team up with Radvanovsky from Norma a few seasons back and sounding as good as ever), entertain some other girls with music. In this production, one of the girls is playing an upright piano live on stage to “accompany” the singing, which was excellent. Radvanovsky and DeShong are playing their characters as very, very young here.  You get the impression, just from physical movement, that they are teenagers. It was exceptionally well done.

Once the other girls leave, Lisa, alone, confesses she doesn’t want to marry Yeletsky and is intrigued by her stalker Gherman and his ardent looks.  Like every silly young girl in romantic fiction from Clarissa to Twilight who thinks stalking equals true love, you just have to shake your head. Gherman appears, creepily talking to her through her skylight, and then materializing disturbingly in her bedroom by breaking the 4th wall. 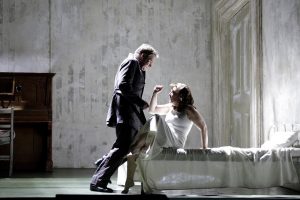 In typical manipulative abuser fashion threatens to shoot himself if she marries someone else. Everything about it is creepy and Lisa is clearly quite scared of him. This is all you need to know about how this “relationship” is going to pan out.  But, like so many “romantic” heroines Lisa is convinced he truly loves her because of his obsessive fixation on her and hides him from the Countess. He seduces her in a sequence that is quite rapey and disturbing.

You should get used to being disturbed because this production ramps that up from here and just keeps going.

Act Two begins with a ball that brings everyone together. Where the ballet would ordinarily be, you are treated to an incredible puppet show put on by five extraordinarily talented puppeteers manipulating puppets that push the uncanny valley to the nth degree until everything is unsettling.  Singing voices for the puppets are wonderfully performed by Laura Wilde, DeShong and Yeun.  The major plots revolve around Herman’s joint obsessions with meeting up with Lisa behind her fiancée’s back and finding out the Countess’ secret. His terrible friends continue to goad him about the three cards, further unhinging him and Gherman descends into complete madness. Catherine the Great arrives while Gherman grins dementedly while wearing a golden crown party hat. Jovanovich is spectacular here.  The acting and singing by everyone is just outstanding.

Gherman goes to the Countess’ room to find her secret and hides behind a giant portrait of her when he hears someone coming. The Countess returns from the party and with a vast group of maids reminisces of past glory singing an aria that amounts to “you kids, get off my lawn” containing every criticism the elderly have leveled at the young since the dawn of time up to and including, “all your music is terrible nowadays.” Her maids put her in the bath facing a giant portrait of herself in her glory days and leave. Gherman pops out and demands her secret when she refuses, he threatens her with a gun.  He scares her to death. Lisa rushes in to find him standing over her dead grandma and orders him out.

Act Three is where we see just how much Gherman has degenerated.  The act opens with us staring DOWN at him into his tiny bedroom, while he tosses and turns. It’s a GREAT optical illusion and makes you forgive how weird and boring the sets have been until this. While feeling guilty in his barracks, Gherman gets a letter from Lisa asking him to meet her at midnight and if he doesn’t show it means he meant to kill her granny. Gherman tries to sleep but can’t.  Suddenly he’s joined in the bed by a GIANT PUPPET SKELETON and it is so awesome you can hardly stand it.  It is the Countess’s ghost. The GIANT PUPPET SKELETON GHOST says Lisa is in danger and gives him the secret of the three-card winning combo. three, seven, ace, because the GIANT PUPPET SKELETON GHOST says she thinks Gherman truly loves her granddaughter and is forgiven.  He and the oh, so creepy GIANT PUPPET SKELETON GHOST embrace.  (Honestly, this was worth the price of admission alone and it was so disturbing, and I can never unsee it, not that I want to.)

Lisa waits for Gherman in the park from Act I singing of love and hope. He shows up with all his money in a plastic bag, babbles about the Countess’ secret and runs off, taking the money but leaving the bag behind. Lisa puts the plastic bag over her head and kills herself like you do because you’re bad-decisions Russian emo-teen and have suffered profound disappointment.

Yeletsky, joins his fellow officers at a gambling house to mourn his broken engagement, which happened offstage. The gambling house is the Countess’ bedroom from Act II, only with a huge canted round gambling table and a circle of half-dressed men around it sweatily gambling in a very homoerotic fashion. Then Tomsky sings a song about how they wished they were romancing pretty girls while a very pretty boy in high heels, makeup and a sparkling top (dancer Phillip Christian) dances erotically with him and is spanked along with appropriate lyrics.  Just roll with it because it is really good.  Gherman shows up, obviously insane and starts betting high.  Yeletsky thinks it might lead to dueling, but Gherman is all about cards.  He bets all his rubles and wins with the Countess’ three.  Next, he bets it all on the seven and wins again. Then he bets his whole stake on the Ace, but his card is the Queen of Spades and the Countess’ GIANT PUPPET SKELETON GHOST appears in the skylight above to have the last laugh. Gherman kills himself with his gun because why not? He’s mourned by the boy chorus and Tomsky, who ends outstretched on the giant gambling table with him in a tableau at the end.

It was so crazy and fabulous it has to be seen. I mean, I told you what happened, but it’s so great you really need to see it. There’s a ton of nuance and the puppetry and singing and gorgeous orchestration all needs to be witnessed in person.

The one truly confusing bit was the costuming.  In the first sequence, everyone appears to be in 1890s-era outdoor coats.  By the party scene, the costumes have morphed to perhaps 1961 or so with beehive hairdos and bouffant galore.  I realize this is all madness but pick an era.  The early 60s is fine.  It is a tiny quibble.

The Queen of Spades will soon be gone. Get your tickets immediately at the Lyric Box Office!

I Puritani – Phoned in Long-Distance at the Lyric Opera

February 7, 2018 Suzanne Magnuson Entertainment 0
Spread the love
Spread the loveIf you’re going to put in this little effort on something, why bother?  That’s what I kept asking myself while watching the current production of I Puritani at the Lyric Opera. At every […]

March 5, 2019 Suzanne Magnuson Music & Arts 0
Spread the love
Spread the loveBizet’s masterpiece is a perennial crowd-pleaser and as seen in brilliant HD through Fathom Events, this version of Carmen has a great deal to recommend it. The production has seen fit to set […]