Chicagoland is a Foodie’s dream… and nightmare. As one of the world’s greatest cities, it’s bound to have some of the world’s best food and drink. Yet, Chicago is blessed with more options than any human can effectively process. FINDING great new places is as easy as stepping out your front door… and as daunting as doing your taxes. 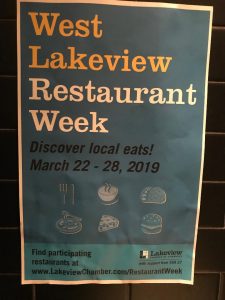 Luckily, events like West Lakeview’s Restaurant Week make it easy. Nestled just blocks from the tourist mecca of Wrigley Field, the real Chicago is waiting for spring. Here, you can wander from warm brew-pub to casual pizza joint to some of the finest dining in a city known for great food.

Restaurant Week is the brainstorm of Carisa Marconet – Lakeview Chamber of Commerce’s Events Manager. Highlighting the Southport corridor and nearby areas, the first annual event offers foodies 16 choices all within walking distance on a cool spring evening.

“We allow any restaurant within our district of West Lakeview (Racine to Ravenswood and Irving Park to Diversey) to participate, which is part of the beauty of this event. It features casual dining as well as more high-end options.” Marconet said.  16-participating restaurants offer a huge variety of drinks and dishes. And with great entertainment options like the Music Box, Mercury Theater, Schuba’s Tavern and dozens of others nearby, the West Lakeview neighborhood encourages diners and drinkers to choose their own adventure.

We started our own night at Grassroots Grill where we were greeted warmly by Lynne, one of the owners. She explained their farm-to-table, sustainable approach to traditional Chicago favorites.

“Our menu is mostly sourced from Southwest Michigan farms. 14-day aged steaks and burgers, organic and local wild-caught fish… even our kid’s menu is from Kaminsky Farms,” Lynne said.

Sharing an entry with the Mercury Theater, Grassroots offers a warm, casual yet high-end ambiance, perfect for gathers, nights out, or a quick bite after a show. The bar features a few specialty cocktails and pours of premium spirits. 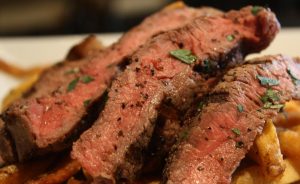 Executive Chef Tony Albanese has crafted a menu of solid favorites for Restaurant Week. Crispy Brussels Sprouts with peanuts and bacon started our meal. Then, we sampled a Kaminsky Hanger Steak with parmesan herb fries and their unbelievable caramelized Salmon with black rice, spinach leeks, pear-ginger beurre blanc. All were exceptional and we will soon return for more.

Grassroots undeniably earns its consistently glowing online reviews and is highly recommended to anyone that enjoys exceptional fare made from scratch.

Switching gears, we took a short 5-minute walk down the street to Corridor Brewery and Provisions. 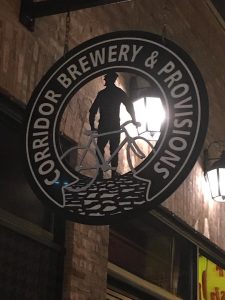 If you’ve ever imagined what the quintessential Chicagoland neighborhood brew-pub might look like… you can put your mind to rest. It exists and it’s on Southport Ave.

We were greeted like old friends at the door by Lydia, who used to be a regular until they welcomed her into the family. “That seems to happen a lot here,” she admitted. “People who come just don’t want to leave.” 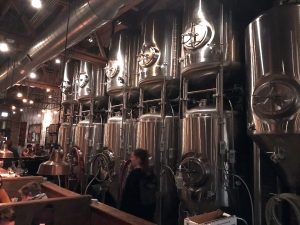 The interior is dominated by the brew-vats themselves. Lining one wall, they promise a variety of malt and hop-filled wonders on tap. An opposite wall features a vintage tandem bicycle for some reason… and there are exactly the chalkboard menus and long trestle tables that encourage experimentation and friendly chatter that should be present in a place like this.

Corridor prides itself on “Making food that appeals to people’s humble warmth.” according to culinary director Ryan Henderson. Offering an assortment of the best comfort foods, its selections revolve around hand-crafted Pizzas made with Illinois-sourced Mozzarella and dough, huge sandwiches and burgers that could choke a hobbit, and salads that let you pretend to be calorie-conscious. Their Restaurant Week Menu includes a Shrimp ceviche appetizer, hand-made Pizza featuring pork shoulder from local farms, and two beers to share.

But… it’s a BREW pub. So, we got to drinking. A flight was delivered to our table within moments of sitting down… and we rose to the challenge of sampling each of the current offerings. Lucky for you, we took notes that are only slightly less coherent as the night drew to a close.

Shift Beer – American Lager on par with any other anywhere! Light and crisp and screams “play ball.”

Wizard Fight – American IPA… darker than it looks. Oaty and unique. Sign up for Defense Against the Dark Arts. It’s awesome.

Operatic Section – English IPA. Everything you either love or hate about IPAs in a glass. Hops for days.

Brambi – Fruited Sour. God knows why some like fruit in their beer. If that’s you… this is raspberry heaven.

Hew – West Coast IPA. Yet another IPA because you can’t OD on hops. Bitter like memories of sex with your ex.

Corranator – Doppelbock. Notes of… Toast? Not sure what they put on their toast but it’s great and largely indescribable. Your hipster neighbor’s favorite non-ironic beer.

One night… two amazing and radically different restaurants… one five minute walk. Chicago, I love you. I love my job. I love nearly everyone after the great food and drink offered at West Lakeview Restaurant Week. We’ll be back sampling more of what this real Chicago neighborhood has to offer as the week goes on. And we encourage you to do the same… Cheers!

August 14, 2017 Meagan Sargent Restaurant Reviews 0
Known for its flavorful food and off-the-beaten path gems Koreatown is nothing short of picturesque skylines and perfect hues for instagram. However, the chic culinary town has added another one to the list, Mama Lion! Mama […]

Hubbard Inn for the Night- 3 floors, for an All in One Date

November 26, 2019 Yvonne Pulido Hotels & Resorts 0
Grand openings really can be anything but grand sometimes. Given that one definition of grand is described as highly ambitious or idealistic, one’s expectations can be set a bit too high. Or turn slightly salty […]

September 27, 2018 Sharon Sultan Cutler Restaurant Reviews 0
Almost every table was filled when my husband and I went to dine at Grill House at 3061 Dundee Road in Northbrook, Illinois. For me, that’s a good sign, especially since the gentleman next to […]